Time to clip those claws ...

Just our luck that despite being a less than stellar tree-climber,
he's a complete master when it comes to scaling a screen.
SIGH. 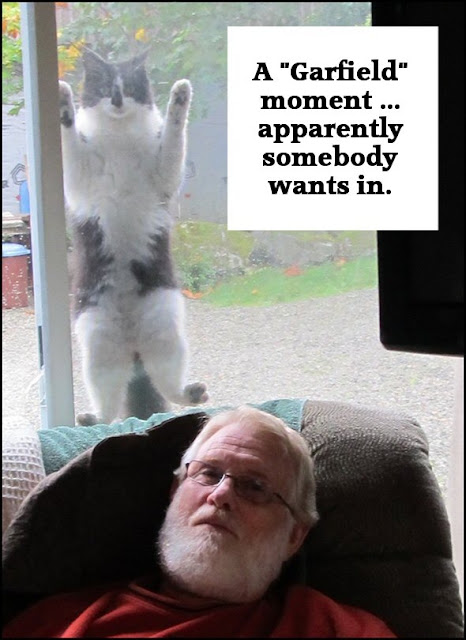 Youngsters are always biting off more than they can chew ... 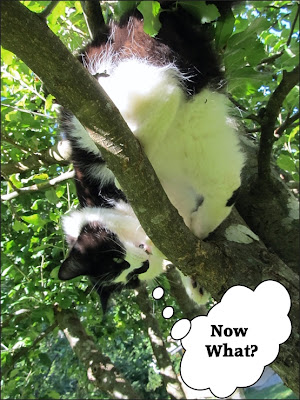 Our intrepid adventurer finds that getting down isn't
quite as straightforward as getting up ... 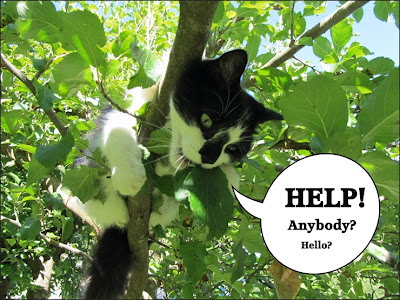 ... much to the amusement of more seasoned aerialists. 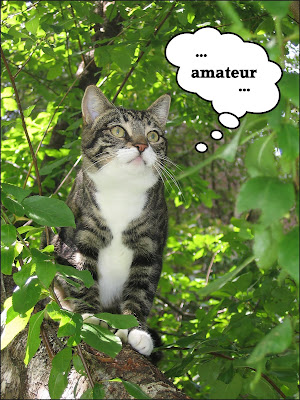 Might take a bit to live this one down. 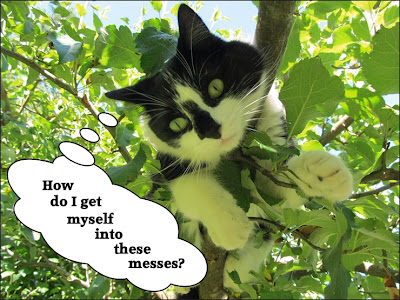 Karma isn't the most graceful feline in the pride,
but what he lacks in technique he makes up for in personality.
:)
Posted by Nina at 3:00 PM No comments: 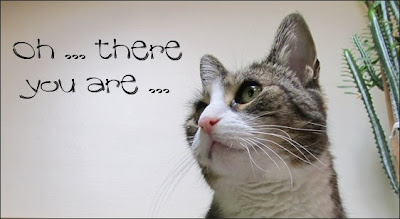 Yup, here I am ... still alive and kicking despite the long absence.
I'm sure that it would be much more interesting if I could report that my silence has been the result of an adventure-packed couple of months spent trekking the highways and byways of strange and exotic locales, but the truth, sadly, is far more mundane. This summer ( what little we've actually had ), has been spent in pragmatic pursuits ... topping off our firewood for the coming winter, poking away at various projects on our property, clearing the ever-advancing salmonberries and salal, gardening, etc., etc., etc ... yes, I know, the excitement is overwhelming.
So ... Mary, Mary, quite contrary, how does your garden grow? Grudgingly, if you're a West Coast Canadian like myself. To be blunt, it's been a crappy season. Coldest spring in decades, a summer that didn't seem to get off the ground until August, grumpy gardeners grieving over less than stellar plots everywhere.
Ah well. Guess I should be grateful for whatever my poor beleaguered garden manages to produce - and in all fairness we have been eating well from a few crops ... beans, peas, swiss chard, beets, radishes ( after resowing in a different spot - the first crop was riddled with cut worms, but after nestling them in beside the garlic our second harvest was much improved ). Our cucumbers went into a protracted snit due to the unseasonably cold conditions, but they're finally relenting and actually producing cukes that seem to be doubling in size daily. Desperately trying to make up for lost time, I guess. Hopefully the warm weather that we've been enjoying for the last couple of weeks ( better late than never ) will hold for a while longer! 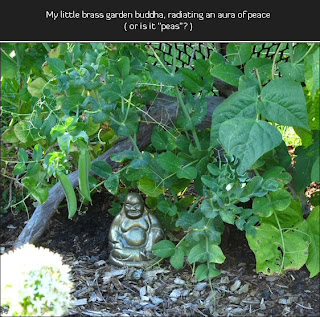 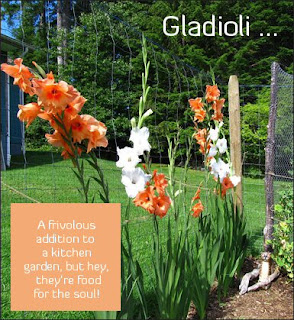 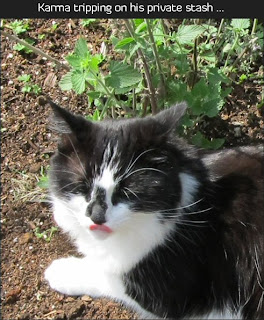 Furthermore, our spoiled kitties have not just one catnip patch,
but TWO ... 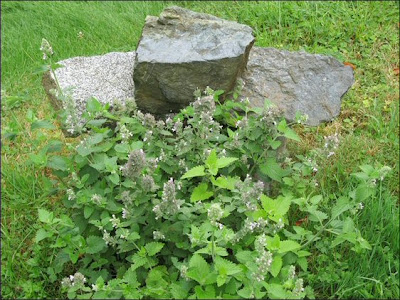 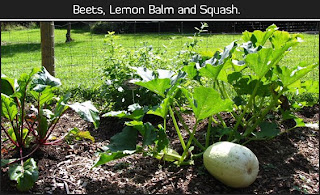 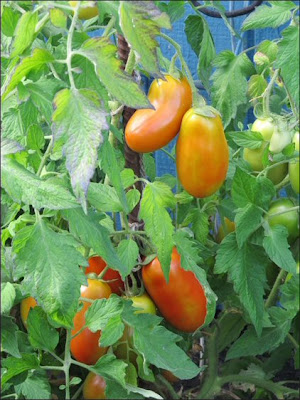 Hubby's tomatoes are finally starting to ripen.
We were beginning to despair, but it appears that there's hope yet. 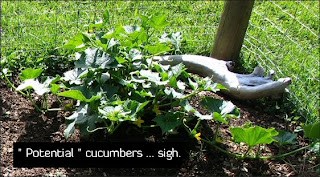 However, since snapping and captioning this shot, we've
discovered a few hardy cukes hiding beneath the leaves.
Come on, little guys, you're in the home stretch now! 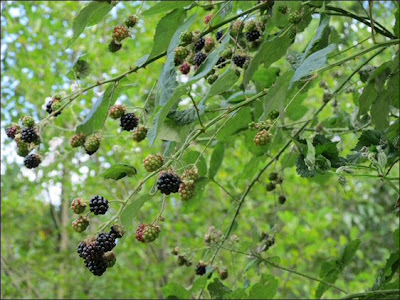 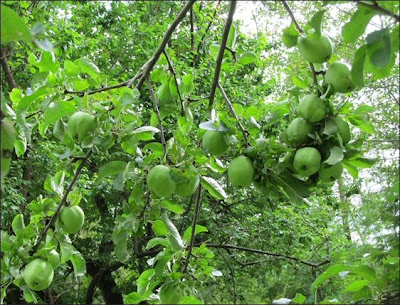 Granny Smiths ... more applesauce sessions on the horizon.
We dry them as well - Chris loves the chewy slices as finger-food, but they're also
lovely chopped and added to curries.
So, all in all, despite the uncooperative weather we've been fairly lucky. It''s always fun at this time of year to make the daily rounds - checking out the progress of the various crops, eagerly anticipating the sumptuous meals to come ... it's a very satisfying thing to raise your own fruits and vegetables; somehow you appreciate your produce more when you've invested your time and effort in its growth, familiarizing yourself with the individual plants' needs and temperaments ( and yes, I swear they have personalities ... some seem to have more "attitude" than others! ) By the time your crop makes it to the table you've developed a healthy respect for the food in front of you, and each mouthful is correspondingly sweeter.
I wish you all a glorious and mouthwatering bounty - happy eating!
:)
Posted by Nina at 5:10 PM No comments:

Email ThisBlogThis!Share to TwitterShare to FacebookShare to Pinterest
Labels: fruits and veggies, gardening 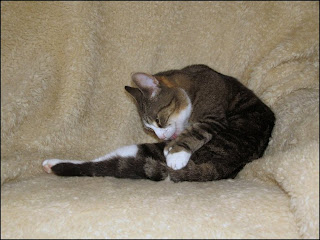 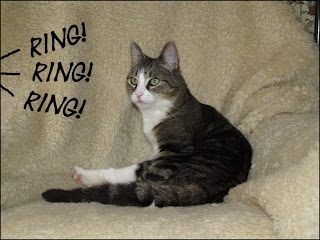 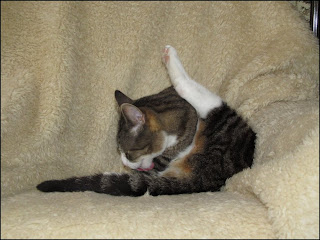 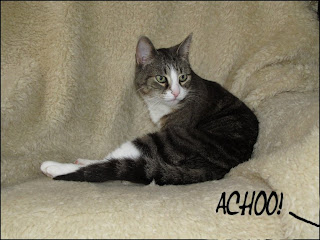 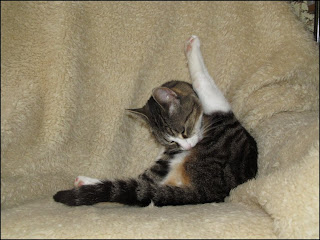 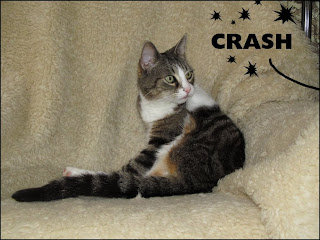 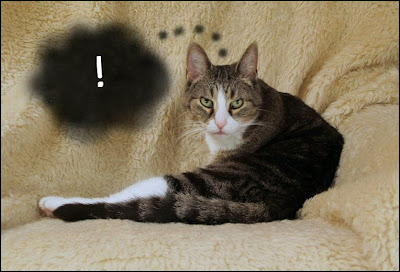 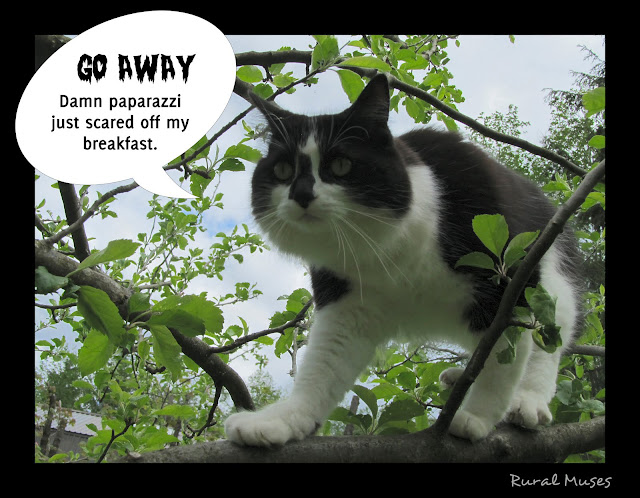 The Rapture has been canceled until further notice ...

Huh - look at that ... we're still here.
Mr. Camping must be feeling pretty sheepish right about now.
The Cosmic Cancellation must mean God has decided to leave us to our own devices. Can't say that I blame Him - would you want us crashing the Pearly Gates?!
But, never fear, all you Dooms-Day addicts ... there's always the looming possibility that the scientists at the Large Hadron Collider may succeed in creating a Black Hole stable enough to make Saturday's disappointment moot.
There are all kinds of ways the world could end, and frankly I think we're doing a pretty competent job of this without Divine Intervention. ( Cynical? Yup ).
Stay tuned ... 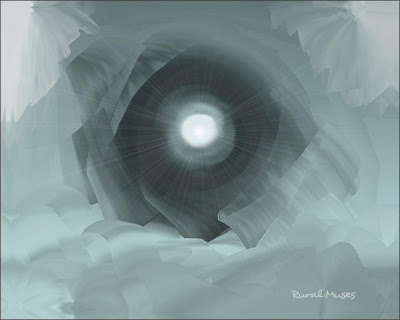 Nina
I share my life with four cats, a dog, various visiting wildlife, and a bearded husband ( what can I say? I like furry faces ). We live a down-to-earth life, nourished by clean air, good neighbours, and an immense sense of gratitude that we're fortunate enough to live in an area still rooted in wildness and unspoiled beauty. So ... what do I do to occupy myself when contemplating my navel isn't enough? I dabble in photography, crafting, jewelry-making, digital art, reading ( I'm a hoarder in this respect, our books tend to settle in drifts around the house ), making preserves, hiking, and acting as referee to the multitude of furballs we share the house with. Thanks for visiting ... did you bring catnip? 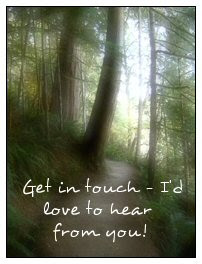